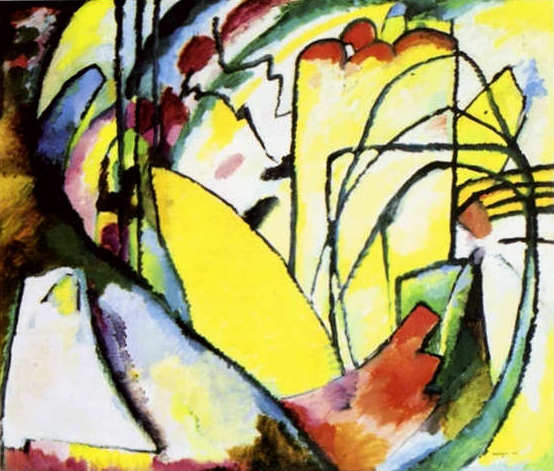 100 year ago Wassily Kandinsky [1866–1944] published a text in “The Blue Rider” Almanac that could be considered to be the founding manifesto for sound art, or at least as its precursor. His text, “A Stage Composition”, served as the preamble for a planned theatre piece titled “The Yellow Sound”, and called for no less than a new interconnection between the arts, an “inner” link between “sound, colour, word!” and movement. Alone the fact that Kandinsky replaces music, painting, theatre and ballet with abstract notions of materiality is well ahead of its time, and sound art features in it as a new intermedial art form. His Yellow Sound was, however, never produced during his lifetime.

Georg Klein, who is best known for his politically provocative sound art works in public space, alludes with this work to the historical origins of this artistic discipline and transfers Kandinsky’s ideas into a contemporary form of sound art. The point of departure is an abstract “yellow noise” created parallel to the ‘white’ and ‘pink’ noises familiar from acoustics that slowly shifts to form ‘triangles’ of concrete sound. The triangle, which Kandinsky associated very strongly with the colour yellow, also appears as a spatial acoustic constellation within which a central sentence from Kandinsky’s text crystallises as sounds in Russian and German spoken by the composer Sergej Newski.
The transition from the concrete to abstraction, as observed in Kandinsky’s work around 1910, becomes a musical theme here both in the sounds as well as in the spoken text, which is supplemented by a 7-part series of yellow posters where four consecutive lines of Kandinsky’s text are to be read. The yellow of the space was taken from Kandinsky’s painting “Improvisation 10”, and so “sound, colour, word” conjoin site-specifically and can be experienced by passers-by in the movement within it.

BIOGRAPHY
Georg Klein, born in Öhringen, Germany in 1964, lives and works in Berlin.